Spurs Supporters – A sense of Pride

No not the ones that sing their lungs out from the stands at white hart lane every week… nor the ones that travel all over the country to sit in rain, hail, snow and freezing cold winds to Â cheer the lads on in away games… It goes without saying that they are the heartbeat of the club and they deserve a highly honorable mention preface stylee. 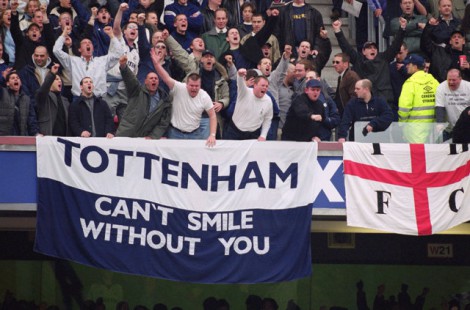 No the supporters Iâ€™m on about, or perhaps I should say ‘supporterâ€™ is the club itself… although it provides support on so many levels to all kinds of areas of the community its fine to use the plural ‘supportersâ€™ in this context I suppose. Confused? Let me explain. If you are like me then you have a bit of a shifty look at the news updates on the official club site but very often skip over the snippets of news about the Tottenham Hotspur Foundation.

Now before you contemplate clicking off in preference of reading more sporty, footballish, Spursy stuff hold the phone for a minute. What Iâ€™ve done is compiled a selective list of what i thought were the most impressive/diverse support activities the club has been involved in around the country/world in recent years. Ive scanned through page after page after page and plucked out the best of the bunch. As a massive big up for the Tottenham Hotspur Foundation who are the driving force behind the majority of ourÂ philanthropic. achievements & efforts. Take the time to have a look.

Hopefully it will give you a lift, a sense of pride & an extra special feeling the next time you catch sight of the crest on your ticket/programme/shirt/tie/beanie/scarf/pyjamas/slippers or even the missus bra (yes the club does sell them lol).

Nominated for ‘BT Sport Industryâ€™ community project of the year for E18HTEEN (You may have seen Jermaine Defoeâ€™s video interview on this) results are out on May 8th 2014. http://www.tottenhamhotspur.com/foundation/news/e18hteen-nominated-for-award-280214/

Built a massive state of the art university/technical college for year 10 and upwards & get this, its state funded not private, how cool is that? http://www.haringey.gov.uk/index/children-families/education/schooladmissions/utc.htm#tottenham_utc

Working in the communities & alongside the police in Rio De Janeiroâ€™s Favelas to try and use football & knowledge of gang culture in North London to help ease the problems associated with gang culture in Brazilâ€™s most troubled region. http://www.tottenhamhotspur.com/foundation/news/foundation-rio-project-190214/

Song promotors lol… I had to fit this one in as its ‘a song for Tottenhamâ€™ by a bunch of kids effected by the riots. Ledley King has been publicising it everywhere and we even opened up white hart lane for them to gig it. Heres a THFC cut of the song. http://www.youtube.com/watch?v=t0HVqncycF0

Created (At last count in 2012) a staggering 1.5 million life changing opportunities for people in the community. In only 5 years!!! If thats not worth a read what is? http://www.tottenhamhotspur.com/foundation/news/tottenham-hotspur-foundation-five-fantastic-years-020312/

Played football outside number 10 Downing street after getting a big up from the PM for the work of the THFC Foundation. Sorry for the small picture its all I could find, if you squint you can see Ledders and Robbo. http://www.tottenhamhotspur.com/foundation/news/tottenham-hotspur-foundation-receives-strong-political-backing1-040207/

I scanned over 250 newsfeed snippets looking for the above & I know for a fact that I could have posted a shed load more on here. Initiatives involving education, disabilities, autism & aspergers, unemployment, disease, racism, health and others.

Its been a worthwhile exercise as Its brought me even closer to the club than I was before, something I didnâ€™t think was possible. Its made me think differently about those news items I usually skip over as I rush through the news looking for the latest injury info, match previews or football related news & videos. If it has the same effect on others who read this then for me thatâ€™s mission accomplished.

If you want to read all the Foundation news as far back as 2007 or simply keep up to date with the latest goings on, much of which involves our very own Ledders heres the link to the official foundation news feed page. Â http://www.tottenhamhotspur.com/foundation/news/

*If you want to comment on this article simply add a username, email address and a password below… its a one off registration and it needs no more than those three things. Alternatively login with facebook, twitter or google using the links.